During our Pirate Theme week, when we weren't working on the pages of our pirate book, we were doing a bunch of other fun pirate themed activities and crafts.  We found some great projects, stories, and songs that went along with our special theme.

The songs were easy this week, I chose two that were already favorites, "The Pirate Song" and "Scurvy Pirate" from the Backyardigans.  Here's a link to some Backyardigans pirate puppets that make singing the songs even more fun!  I chose these songs because they are kid friendly.  There are a lot of pirate songs out there that have some questionable topics in them, but these tunes are on the safer side.  They also are very easy to get stuck in your head! 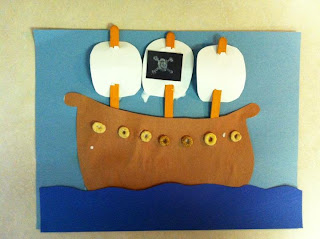 One of our first activities of the week was this very easy but adorable pirate ship craft from Busy Bee Kids Crafts.  With just some construction paper, craft sticks, and some Cheerios, you can create a fun pop off the page pirate ship!  The kids especially loved snacking on the Cheerios while we were making these.  We didn't use their template, so we weren't able to fit as many sails on the page, but they still turned out pretty darn cute!

No pirate is complete without his a pirate hat so we also had to make these paper tricorns from Disney's Family.com website.  I wish I had a good picture of how these turned out but my little pirates were running around in their underwear while wearing them, so I'll keep those for the personal album only! 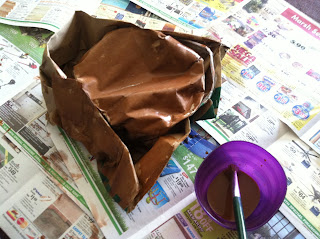 I was able to snap a few pics as they were painting them however.  We used a a brown paper sack instead of packing paper.  Also we skipped the sewing part.  While I'm sure that would have looked nicer, I was looking much quicker and easier hat.  We ended up stapling the sides together to form the points, and used some twine as a little embellishment. 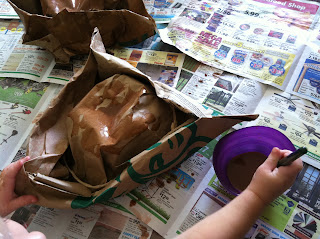 They took quite a while to dry because the kids really layered on the brown paint, but once they were dry these hats turned the kids into instant pirates.  They were running around in them calling us scurvy pirates and telling us to walk the plank!

This is not a working compass, but a quick and easy way to introduce directions to kids.  Once mine are both a little older we'll try making a real one.  We used these small plain paper plates to draw our compass on.  The top one is my 2 year old's compass.  The bottom left is my 4 year old's, and mine is the bottom right. 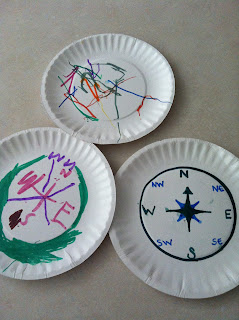 Here's a close up of mine.  We took this compass on a "treasure hunt" (ie geocaching!!), and used it to find our way to the hidden treasure.  I'll post more about that later. 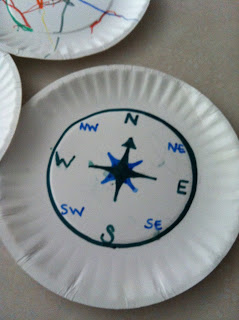 We also used the compass to help find some pirate treasure using a free downloadable PowerPoint at http://worldhistory.mrdonn.org/powerpoints/pirates.html.  Click on the link for "A Treasure Island.ppt (Captain Smuggle)".  This was a huge hit.  My son is really into computers so anything interactive like that always gets him excited.

Here are links to two other great online pirate children's stories we read:
We also read some pirate books from the library.  This one about the Lego pirate "Brickbeard" was my son's favorite.

And lastly, we read a history of the pirate Blackbeard from National Geographic.  My son got bored with this one, it wasn't as fun as the other stories so he wasn't all that interested.

There were several other crafts we didn't get to this week.  But I've got them saved to my Pirate board on Pinterest for the next time we get an urge to act like pirates!